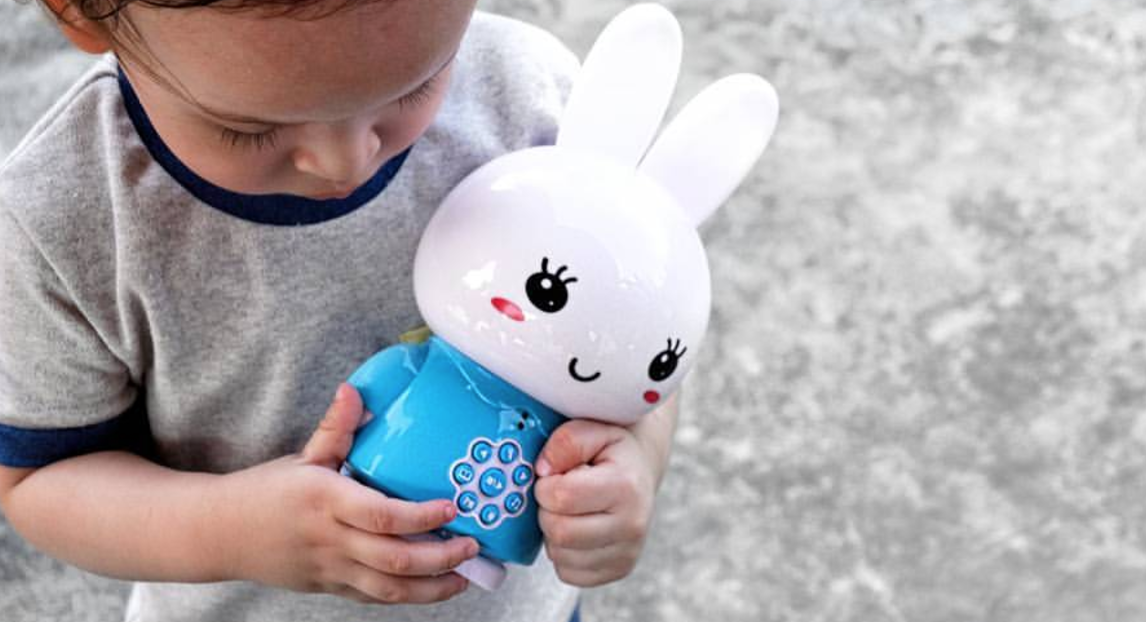 As a parent who tries to continually engage her children in songs, interactive play, physical activity and multi-sensory experiences, it can get tiring to conjure up new things to engage them in. To add on to that, we have a big family trip coming up and a dreaded 8 hour flight with cranky toddlers and I was researching on a multitude of options to keep them engaged on the flight. So when I found out about the Alilo Bunny, I thought it’d be a great option to help keep my twin toddlers occupied and jumped at the chance to give it a go!

Getting it set up

The box included the Alilo Bunny, its remote control, an instruction leaflet and a micro-usb charging cable. The instruction leaflet is about 8 pages and is very easy to understand. I was so excited to try it that I was able to intuitively toggle with the buttons before even reading the instruction leaflet. One of my boys who happened to stumble upon the bunny while I was toggling with it was able to move through the songs after I told him which button to press if he wanted to hear the next song or story. For busy parents with no time for cumbersome parts and lengthy instructions, the Alilo Bunny is a great option for an interactive toy.

The Alilo Bunny G7 comes with 10 pre-loaded nursery rhymes and 10 bedtime stories which is great for someone who needs to use this straight out of the box. And since the G7 version comes with 8GB… yes you did not hear me wrong... 8GB of memory space in the SD card, there is literally a library of songs and bedtime stories you could store in there. 2GB is equivalent to 500 songs or 100 stories so you can do the math lol. The Alilo Bunny supports MP3, WAV and WMA files which gives you a wide selection of files you could load into it. This makes the Alilo Bunny a great alternative to the TV and the phone because I can now turn educational programmes into audio files instead and cut out the visual over-stimulation.

You can also record your own voice so your child can fall asleep listening to your voice and can be of comfort especially for cranky or sick children. We brought it along when we had to do a quick run for groceries and my younger boy was tired and didn’t feel like socializing with so much going on around him. So he was just holding on to the Alilo Bunny for comfort and found the melodies and lights soothing.

When I first picked up the bunny, I was a bit fearful of dropping it and causing the plastic to crack, knowing how rough children can get with toys. Thankfully, there was no cause for concern because the Alilo Bunny is made of durable drop-resistant ABS plastic (30 times tougher than ordinary plastic). The rounded head is great for small hands to cup and the silicon ears are really fun to squish and hold. Although the bunny is a bit heavy for a child to carry around, it’s a great companion for bedtime or when a child is seated or playing in an area.

Besides the Alilo Bunny’s silicon ears changing colours when the songs and stories are playing, it’s actually doubles up as a night light!  The bunny’s head emits soft lighting that is perfect or bedtime or a midnight change/feeding. The Alilo Bunny can also be a speaker which you can plug into your computer via the USB cable. Although I don’t foresee myself using this as a speaker, it sure never hurts to have that option. ;)

After bringing it around with me for a couple of days, I’ve found it really useful. Whether it’s keeping the children occupied so I can pack their diaper bag, distracting and soothing  my younger boy when he was tired and felt overwhelmed at the grocers, keeping my boys engaged during longer car rides and even when the boys were being difficult during dinner time when they were sleepy and needed some entertainment to distract them. I foresee a longevity in the toy for me as my children will progress to listening to stories when they are older instead of mostly nursery rhymes now. So if you’re in need of an interactive toy that can engage your child from newborn upwards, you definitely should consider the Alilo Bunny.